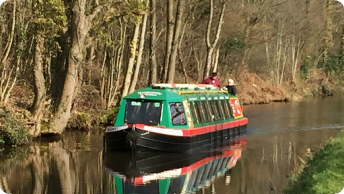 Brecon, or Aberhonddu as it is known in Welsh is an historic market town in the heart of the Brecon Beacons National Park. Ancient Britons, Romans and Normans have each left their mark on Brecon.

Brecon has a wide range of independent retailers as well as high street stores offering you a comprehensive shopping experience!

There's a thriving creative community in and around the Brecon Beacons National Park, making this a superb region to shop for handmade gifts or art inspired by the countryside.

All our towns have something different to offer. Brecon and Crickhowell have a good mixture of outdoor shops and boutiques, while Abergavenny is fantastic for food.

The quirky, arty town of Hay-on-Wye is world famous for bookshops and has much more besides. Llandeilo, a characterful town with some fine Georgian and Victorian buildings, is excellent for antiques.

In our villages and rural areas, you'll find general stores and farm shops stuffed with Welsh specialities and seasonal produce, while our National Park visitor centres and tourist information offices are good places to pick up local maps and guides.

A few miles to the south is Cyfarthfa Retail Park offering shopping by many top High Street names and a health club.

We are close to Hereford in the north and too the south you will find the Cardiff, our capital city of Wales.

The town's name comes from that of the old Welsh name of the kingdom - Brycheiniog' in whose territory Brecon stands. The kingdom took its name from Prince Brychan who founded it, and who remains a colourful character in local folklore and legend. The name later became anglicised to Brecknockshire or Breconshire. The Welsh name for the town 'Aberhonddu' indicates the position of the town as being at the 'mouth of the Honddu' - where the River Honddu meets with the River Usk near the town centre.

A short distance upstream, the River Tarrell enters the Usk river. Before the building of the bridge over the Usk, Brecon was one of the few places where the river could be forded, making it an important strategic military position as well as an important crossing point in mid Wales for drovers, farmers and merchants.

It is therefore not surprising that during the Norman invasion of Wales, Brecon became the site for a defensive Norman castle built by Bernard de Neufmarche in the late 11th century. Less than a mile from the remains of the castle stands Brecon Cathedral, founded as a Benedictine monastery by Neufmarche's confessor, a monk from Battle Abbey in Sussex. While fairly modest as cathedrals go, nevertheless it is of great historical interest, and has seen both Norman lords, Welsh princes and leaders worship and be interred in its grounds. It boasts the biggest cresset stone in Britain with 30 cups (a cresset stone is an ancient form of lighting - essentially a stone slab with a number of holes carved out of it in which to put candles).

Alongside the cathedral stands the Prior's house. One of its most notable occupants was Sir John Price (1502-55) who was church commissioner for Wales under Hernry VIII, and the man given responsibility for dissolving the monasteries in Wales in 1547. He is also the author of the very first book to be printed in the Welsh language 'Yn Y Lhyvyr hwnn' an instruction manual for the Welsh priesthood.

There is a huge Iron Age hill fort of Pen-y-Crug, on a hill just to the north of the present town has a circumference of 503 m and ramparts 5.5m high.

To the West of the town lies the largest Roman fort of its type in Wales - Brecon y Gaer, and the remains of the eleventh century castle constructed by the Norman baron Bernard de Neufmarche, can be found in the gardens of the Castle Hotel and Bishop's Palace gardens.

The hills around Brecon boast some of the finest walking and mountaineering terrain in Britain, including Pen-y-Fan, the highest point in southern Britain at 886m. A few miles outside the town is the Brecon Canal basin which forms part of the Monmouthshire and Brecon Canal, and is the starting point of the Taff Trail, a walking and cycling route that follows the Taff river right down to Cardiff.

In August, the annual Brecon County Show takes place. Also the Brecon Jazz Festival is held over 3 days within the town centre with performances in several open air venues, and in a number of indoor venues including the town's market hall and at Theatr Brycheiniog.

Brecon has strong military links to this day. There are two military bases located outside the town. Dering Lines is the home to the Infantry Battle School, formerly known as Infantry Training Centre Wales, and the Brecon Barracks are home to 160 solders of the Wales Brigade. Eight miles away near Sennybridge there is a third military establishment. Sennybridge Training Area is an important training facility for the British.

A FEAST for all the senses to enjoy from bistros, restaurants and public houses to country inns, coffee shops and tearooms.

Our Eating Out Guide provides an array of both new and established places to eat, all offering quality food and service.

Llanfaes Dairy (15 min walk) - Daytime only.. A must for all the family, the kids will love this place!
Bridge Street, Brecon

Above are just a few eating establishments in and around Brecon, however as you take a drive out to the countryside, you will come across many pubs and clubs, not yet discovered by our guests…

Things to do in Town 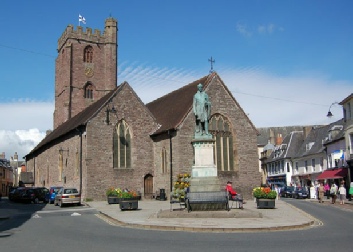 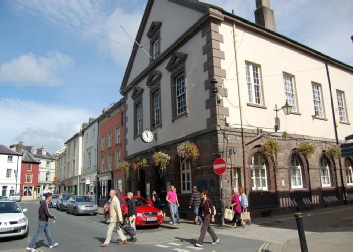 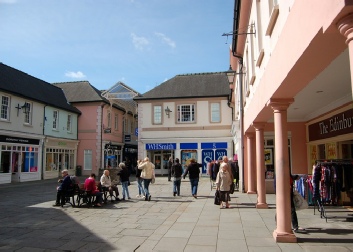 The purpose of this magnificent Cathedral Church of St John the Evangelist is to worship God. We pray here every day, following the pattern of St Benedict.

The Cathedral welcomes everyone who passes through, if you are visiting as a tourist, come to offer your personal prayers and light a candle, or interested in history, architecture or stained glass windows. There are many things to see and learn about.

Brecon is a typical Welsh market town.  It has had it's share of happiness, sadness, characters and folklore, and the museum portrays all these in a well presented way.

Brecknock Museum & Art Gallery occupies an historical Grade 2* listed building, the old Shire Hall, at the heart of the town of Brecon. One of the finest small museums in Wales, it was first established in 1928 by the Brecknock Society.

Theatr Brycheiniog, Brecon’s Centre for the Arts opened in April 1997, as the first wholly funded Lottery new build arts organisation in the UK. The Arts Centre is probably situated in one of the most picturesque locations of any venue in the UK. Built alongside the canal basin in the heart of Brecon, serving the town and surrounding areas of Powys, Monmouthshire and beyond, it is rooted firmly in the community it serves. The venue currently provides a varied programme of theatre, dance, music and entertainment in its purpose built 477 seat auditorium and 120-seat studio/rehearsal space. It also hosts an exhibition programme in the Gallery.

The Regimental Museum of The Royal Welsh (Brecon)

The Royal Welsh is Wales's infantry regiment. It has inherited a distinguished military tradition from its predecessors: The Royal Welch Fusiliers (23rd Foot) and The Royal Regiment of Wales (formerly the 24th, 41st and 69th Foot - and later the South Wales Borderers, Welch Regiment and Monmouthshire Regiment). Although, in some respects, the story only began on 1st March 2006 when The Royal Welsh was formed, its history reaches back to the year 1689 when the 23rd and 24th Regiments of Foot were first raised.

Spend a delightful few hours cruising through some of the most beautiful scenery in Britain, lying within the Brecon Beacons National Park.

The Monmouthshire and Brecon canal hugs the mountainside above the valley of the River Usk. Through the four seasons there a fine views and an abundance of wildlife to be seen. 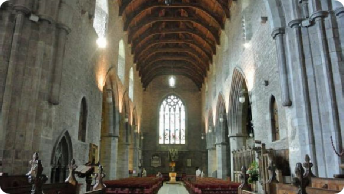 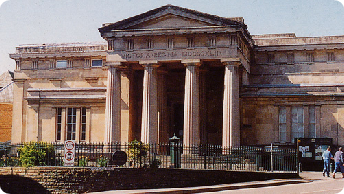 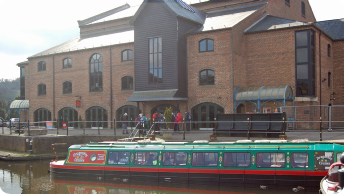 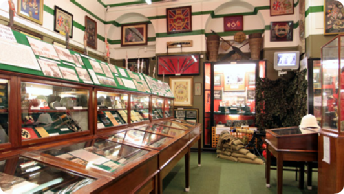 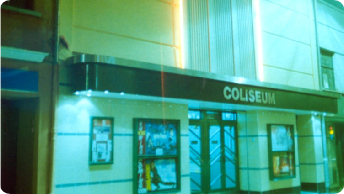